Back to List
News
Yevgeny Kutik in Detroit Jewish News 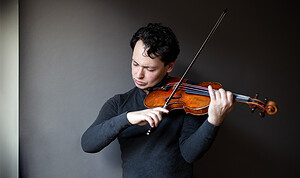 Yevgeny Kutik will be premiering Joseph Schwantner’s Violin Concerto in a program that will include Tchaikovsky’s Symphony No. 5 and Samuel Adler’s Mirror Images, another world premiere.

Born into a family of classical musicians who left the Soviet Union to escape antisemitism, Kutik is motivated to bring treasured music to those of shared religious background assembled in places experiencing limited live entertainment.

Kutik’s in-person appearances, exchanged for Zoom opportunities during the pandemic, are starting to resume as he takes the stage at Detroit’s Orchestra Hall and joins Leonard Slatkin conducting the Detroit Symphony Orchestra. Three performances, with the last available digitally, run Oct. 15-16.

Kutik will be premiering Joseph Schwantner’s Violin Concerto in a program that will include Tchaikovsky’s Symphony No. 5 and Samuel Adler’s Mirror Images, another world premiere.

“This will be my first time working with Leonard Slatkin, so I’m very excited,” says Kutik, 36, and based near Boston. “I have played in Michigan quite a bit over the years, and I’m going up to Traverse City in a couple of months.

“I got to know Joseph Schwantner about 10 years ago, when he wrote a small work for violin and string orchestra called The Poet’s Hour. I recorded and filmed that with Gerard Schwarz and the All-Star Orchestra and got to know Joseph’s music.

“The first movement of the concerto is based on The Poet’s Hour, but it’s much expanded. The second movement is completely brand new, and this piece is just massive.”

Kutik, whose family came to America when he was 5, first learned violin from his mother, Alla Zernitskaya, an award-winning, high-level instructor. He went on to earn a bachelor’s degree from Boston University and a master’s degree from the New England Conservatory of Music.

“From what I understand from my family, I always wanted to play violin,” says Kutik, also the son of trumpet player Alex Kutik and grandson of the late trumpet player Isaac Kutik. “Growing up around musicians and hearing musicians all the time, I think it was a natural thing for me.

“I probably played my first concert when I was 8 or 9. I had a big appearance with the Boston Pops orchestra [and conductor Keith Lockhart] when I was just leaving high school, and that felt like a debut.”

Kutik, who made his 2019 debut at the Kennedy Center in Washington, D.C., can list pre-pandemic engagements that reach from the El Paso Symphony to the Cape Town Philharmonic in South Africa.

Dedicated to the Jewish Community

Besides paying attention to memories of musical experiences described by his family, Kutik has absorbed memories of antisemitic experiences also described. The total expanse keeps him dedicated to culturally enriching the musical enjoyment of Jewish community members while speaking out against antisemitism.

“My family’s treatment as Jews and what they had to deal with [before coming to America] was abhorrent and changed the entire scope of their lives,” says the violinist, who heard about employment quotas and thug violence affecting his relatives.

“I feel it’s my duty to speak out and do what I can to raise awareness for all people to pay attention and really be very careful because history very much repeats itself. Antisemitism never disappeared, and it’s grown in recent years.”

Before pandemic limitations, Kutik worked directly with the Jewish Federations of North America. He would speak at forums and with numerous communities across the country.

Although Kutik did not marry a musician, he did gain a father-in-law who is a musician. While his wife, Rachel, has a yoga studio, his father-in-law, Edwin Barker, plays double bass with the Boston Symphony Orchestra.

A recent Kutik recording project has focused his attention on appreciated cultural aspects of his heritage. The upcoming album, The Death of Juliet and Other Tales, soon will be released by Marquis Classics, the label that regularly represents his talents.

“I arranged a few of them for violin and had two wonderful composers do the other arrangements. The album itself is kind of a narrative intermixing these Russian folk tunes and Prokofiev’s music.”

In rare private moments away from music, Kutik likes to hike, read and experiment with coffee, often searching for specialized gear that can process creative brews to be savored.

“I’m reading The History of the World in Six Glasses,” Kutik reveals. “It traces how the origins of [beverages] shaped history as we know it. I’m fascinated by that, but I just drink a cup or two of coffee [at a time]. That’s good enough for me.”