Back to List
News
Jen Shyu releases a new album ‘Zero Grasses: Ritual for the Losses’ 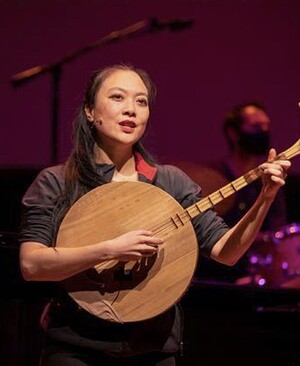 The album was conceived to explore our disconnection from nature and the musician’s question of whether to have a child, then shifted with the death of a family member, the spread of Covid- 19, and the explosion of racial-justice protests

[...] Ms. Shyu initially intended “Zero Grasses” as a meditation on a disconnect with nature, as well as her complicated thoughts about whether and when to have a child. But while she was doing research in Japan in April 2019, her father died unexpectedly. She rushed to her parents’ home in Richmond, Texas. As she sifted through her father’s possessions she came upon her old diaries, reliving not only childhood joys and dreams but also her earliest experiences of racism and sexism. Her project necessarily changed. In 2020, after the sessions for most of this album’s tracks were put on hold until August due to the Covid-19 crisis, and as streets filled with protests, it changed yet again.

[...] Listening to this recording, one can’t see Ms. Shyu at the piano, as at Roulette [venue where artist recorded the show], wearing the peach taffeta dress her mother sewed for her performance, at age 13, with the symphony orchestra in her hometown of Peoria, Ill. Or her banging a spoon against a pot to re-enact both her mother’s futile attempts to awaken her dead father and an element of an ancient Chinese parable. We can’t watch her unpacking her life’s artifacts from cardboard boxes. Yet we share in her powerful unpacking of unsettled feelings.

This owes to Ms. Shyu’s uncommon gift for storytelling and her singular voice. The most appealing qualities of her singing—finely nuanced and ever-shifting tones, a balance of fierceness and tenderness—are present also in the playing here by trumpeter Ambrose Akinmusire and violist Mat Maneri, who use gestures (a choked-off note, a leaning pitch) more than declarations to communicate. Ms. Shyu’s music, which flows like good jazz without riding familiar rhythms, benefits from her communion with bassist Thomas Morgan and drummer Dan Weiss, her partners for more than a decade. [...]