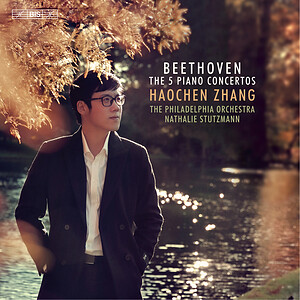 "In 2009, Haochen Zhang was the youngest pianist ever to receive the Gold Medal at the Van Cliburn International Piano Competition. Since then he has captivated audiences worldwide with a unique combination of deep musical sensitivity, fearless imagination and spectacular virtuosity. He now performs the five Beethoven concertos supported by the prestigious Philadelphia Orchestra under its principal guest conductor, the charismatic Nathalie Stutzmann."

"Complete Beethoven piano concerto recordings just don’t just arrive out of thin air. But so it may seem in the just-released set — Nos. 1-5— by pianist Haochen Zhang and the Philadelphia Orchestra under principal guest conductor Nathalie Stutzmann. All five concertos were recorded over three days at the Kimmel Center after only one two-hour rehearsal session. Any project this big would be typically preceded by concert performances or recorded live. But having been planned before lockdown the ambitious recording session left the Philadelphia-based Zhang “shocked and uncertain but also excited. I know how scarce the opportunity is to record with the Philadelphia Orchestra, and not one, but all five of the Beethoven concertos.”

At times, the Beethoven sessions often evolved into live performances in a studio setting. “There really were moments,” he said, “when I forgot that I was recording and was just playing.” The finished set (onthe much-awarded Swedish label BIS) is much in line with the current classical marketplace. Increasingly, young artists take on heavy-weight repertoire that musicians were
advised to save for middle age — or older. Yuja Wang, who like Zhang is a Curtis Institute graduate wasn’t yet 30 when she played Beethoven’s fearsome Piano Sonata No. 29 (“Hammerklavier”). The sentiment is that’s King Lear repertoire: If you wait until you’re old enough to understand it, you might not have the stamina to get through it.

Zhang’s Beethoven benefitted greatly from his encyclopedic memory. From his early childhood lessons in his native Shanghai, he made it a sport of memorizing difficult works in decreasingly fewer days, and discovered that in doing so, he learned the music with greater depth. Zhang approached the Beethoven recording sessions both knowing the pieces and having a cultivated personal concept of the composer, and the 22 years (1787-1809) over which the five concertos were written.

The two early concertos that Zhang knows the least unfold with unaffected spontaneity. He draws in the ear during the broad strokes that open Piano Concerto No. 3. His demure, soliloquy-like treatment of the famous solo piano entrance that begins the Piano Concerto No. 4 reveals Beethoven the architect. “He was able to pull an entire 40-minute work out of a few bars,” said Zhang. “It’s simple but at the same time grand.”

The grandest — the Piano Concerto No. 5 — fascinates Zhang for its way of challenging the limits of music: “This mysterious, complex, enduring, enigmatic personality was able to expand the musical territory, but somehow, in the end, to pull the extremes into the very center so that nothing breaks.” Many musicians say the intensity of the recording process takes them to new insights. So, too, with Zhang.

“My love for these pieces only grew,” he said."

The recording is available at BIS website and at Apple Music.