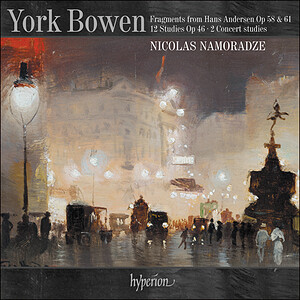 Praised by Saint-Saëns as ‘the most remarkable of the young British composers,’ York Bowen (1884-1961) has all the same never received quite the attention his music deserves. This delightful disc is a treasure chest of lesser-known works given beautifully attentive performances from the acclaimed young pianist Nicolas Namoradze.

Bowen’s Fragments from Hans Andersen (1920) are ten musical vignettes, each capturing a scene or character inspired by the master of fairytales. Namoradze brings a deft touch to these charming works, teasing out their respective tenderness, melancholy and wit with subtlety and poise. The remainder of the disc is given over to a series of studies, all of which happily transcend the purely technical drill. The two brief Concert Studies (Op. 9 No. 2 and Op. 32) are joyous, big-hearted works that demand considerable virtuosity but are nonetheless rich in melody. Namoradze conjures a splendid warmth and depth of sound throughout and is equally at home in the 12 Studies, Op. 46 which follow. Not to be confused with Bowen’s celebrated 24 Preludes,Op. 102, these studies do not adhere to the cycle of keys and each is labelled with a rather forbidding pedagogical title (‘for brilliance in passagework’, ‘to induce lateral freedom of hand and arm’), but they nonetheless hold together as a coherent work and Bowen himself performed the sequence in concert on occasion. Namoradze once more brings total technical assurance alongside exuberance and an unshowy sense of integrity to these fiendish pieces. An altogether enjoyable disc.