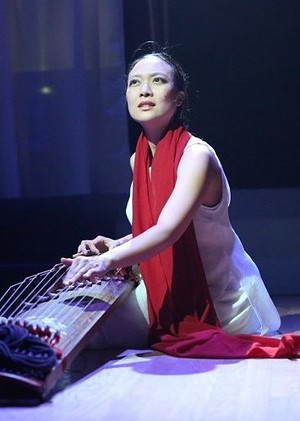 Jen Shyu is singing over the phone.

It’s a song based on a middle-school diary entry that describes her heart breaking as Shyu realizes how she was seen as different from her classmates: “Dear Diary II, 10:46 p.m., Friday. An 8th grader called me a ‘chink.’ ... I felt degraded and confused ... . Why is there racism?”

As one of only two students of Asian descent in her age group at school, the multi-instrumentalist and vocalist was mercilessly teased for most of her young life. “Basically, by 6th grade,” she recalled, speaking by phone from Queens, under mandated COVID-19 isolation along with a sizable portion of the country, “no one would talk to me. ... [W]hen I won the spelling bee, everyone booed.”

For Shyu, a second-generation American from Peoria, Illinois—whose family has roots in Taiwan and East Timor—she hears echoes of the taunts she endured as a child in the recent strain of anti-Asian harassment that’s flared up alongside the coronavirus outbreak. Reports of Asian Americans being accused of bringing the virus here or being told to go back to where they came from aren’t hard to come by. People using terms like “Chinese virus” or “Kung-flu” hasn’t helped matters, either.

None of the artists interviewed for this story have experienced overt bigotry related to the pandemic, but each expressed a genuine fear of leaving their homes, due as much to the reported uptick in anti-Asian sentiment as their civic duty to flatten the curve.

“It’s always been there,” Shyu said about the recent wave of vitriol. “These events, they’re just an excuse for people. And then you have the president.”

While President Donald Trump stopped using terms like “Wuhan flu” and condemned the surge in hate-speech and assaults against Asian Americans, it seems as if the message already has been sent.

“President Trump is continually trying to build his white-nationalist base of support by fanning up this hysteria,” said pianist and composer Jon Jang, one of the cofounders of Asian Improv aRts. AIR originated in San Francisco during 1987, and today remains committed to exploring Asian identity within American music, launching the careers of Shyu and other notable improvisers and composers, including pianist Vijay Iyer and koto player Miya Masaoka.

Jang’s combative rhetoric comes from a man who grew up during the civil rights era and was inspired by the writings of Malcom X and Amiri Baraka. He discovered and took to heart We Insist! Max Roach’s Freedom Now Suite, Charles Mingus’ “Haitian Fight Song” and other works that became the soundtrack for the movement.

“I was politicized by the music,” said Jang, who began composing to call attention to issues such as reparations for the internment of Japanese Americans during World War II, and the murder of Vincent Chin, a Chinese American who was targeted by disgruntled auto workers blaming Japan for economic hardship in the 1980s. Jang sees the current antipathy toward Asian Americans as part of a long history of anti-Asian hysteria in the U.S. that dates back to the mid-1800s.

Shyu met Jang—and his AIR cofounder, saxophonist Francis Wong—when she was studying opera at Stanford. She took an interest in singing jazz standards, before having a conversation with Jang about her various talents.

“[Jon] said, ‘Jen, I just had a vision that you’re going to integrate everything—you’re going to bring everything together,’” Shyu said, her voice thick with fond remembrance. “I had no idea what I was doing at the time. So, for him to say that, it was like a guiding light for me.”

That light led Shyu to Taiwan and East Timor, where she spent years researching the indigenous music of her ancestors, eventually creating “a new music that was deeply informed by what I was experiencing—learning about all this other music.”

THE PARALLELS BETWEEN AIR and the Chicago-based, African American-focused Association for the Advancement of Creative Musicians are evident, both in their fight for social and racial justice, and in their musical aesthetics, which trend toward freer forms of composing and improvising. Similarly, Asian Improv aRts Midwest became active in 2004, when Chicago bassist Tatsu Aoki rebranded his own arts organization in solidarity with Jang and Wong’s outfit. Saxophonist Mai Sugimoto moved to the Chicago area from Japan at age 11, and ultimately found herself, geographically and musically, within Aoki’s community.

“My father is a big jazz fan,” Sugimoto said, speaking from her home in Chicago’s Noble Square neighborhood. “He exposed me to a lot of jazz and black music when I was a child in Japan.”

Sugimoto began to study the saxophone in grade school, and then in college at Northern Illinois University and the University of Cincinnati, learning jazz like many other American students, yet feeling tremors of casual racism in the process.

“People’s expectations [are] very low,” she said about encountering other musicians’ initial assessments of her work. “A lot of people [would say] things like, ‘Oh, I didn’t know Asians could swing like that.’”

Sugimoto first connected her music with her heritage in 2011, when she founded the ensemble Hanami (the Japanese word for the viewing of cherry blossoms) to raise funds for the survivors of an earthquake and tsunami that devastated Japan. She has continued to develop her own sound and style, shaped by her experiences as an Asian.

“I’m still fighting my own ideal of how saxophone should sound or should be played,” she said. “You know, a more muscular approach that we’re used to hearing and have seen in the development of jazz. ... But I’m trying to be more honest about how I feel, how I see my own culture … making something unique to me and not just fitting into jazz or a creative music genre.”

JON HATAMIYA—A FOURTH-GENERATION American from Davis, California—played basketball and baseball as a kid, and learned the blues and how to swing in his middle school and high school jazz bands. His mother, Nancy, was deeply involved with the Bay Area arts community, and knew AIR’s cofounders.

A recent graduate of the Thelonious Monk Institute of Jazz Performance (since renamed the Herbie Hancock Institute of Jazz), Hatamiya represents a new generation of exceptional jazz minds. The trombonist hasn’t had to struggle much with overt racism or his own identity in his life or career. And in many ways, he’s a symbol of how far jazz has come in embracing players of all backgrounds.

“I do feel lucky that those people have paved the way,” Hatamiya said of Asian-American pioneers like Jang and Shyu. “[Asian jazz musicians have] become more commonplace and acceptable, and it’s not even a big deal that I’m out there playing. I don’t take that for granted.”

There are those moments, though. Hatamiya recounted an interaction on a funk gig in New York when a bandmate turned to him and said, “You’re Japanese? Man, you’re not supposed to be able to play like that.”

Hatamiya realized it was meant as a compliment, but it still rubbed him the wrong way.

For Hatamiya, the challenge is for people to recognize his embrace of traditional and modern jazz as a facet of his own identity.

For Sugimoto and Shyu, their intention has been to examine and embrace their identities as Asian women in their music.

“What I’ve been exploring my whole life as an artist is trying to come up in a music world—and more specifically a jazz world—that has objectified me and ‘exoticized’ me as an Asian female,” Shyu said.

Both Shyu and Sugimoto have felt pressure from various people—men who suggested it would bolster their careers if they played up their sexuality. For Asian women, that expectation can cause profound confusion about who they should or want to be.

“When I was little, the thing I wanted to do most was to be Miss Saigon on Broadway,” Shyu said, laughing. “It’s kind of disturbing: My greatest ambition was to be a prostitute on stage.”

The thread tying these artists together is tethered to a needle that pierces the heart of every Asian who was born in or immigrated to the States: the seemingly unsolvable paradox of belonging here and identifying with American culture, yet being seen as “the other” by neighbors.

Jang recently was out buying groceries, preparing to hunker down and protect against the coronavirus, when a woman yelled at him, accusing the pianist and composer of trying to cut in line. He won’t ever know if her anger was motivated by conscious or unconscious racial bias, but it’s a worry that he shares with the other artists interviewed here—as well as those who nervously endure the current wave of bigotry pointed at Asian Americans.

Four decades after the inception of Asian Improv aRts, Asian Americans continue to find different ways of reconciling their origin stories with their passion for jazz and improvised music, knocking down persistent racial stereotypes in the process.

But Jang realizes everyone needs to find their own path.

“For Francis and myself, that’s our history; for the younger generation, it’s not going to be the same,” he said. “What we share is our personal expression in our own unique way. We march to the beat of a different gong.”