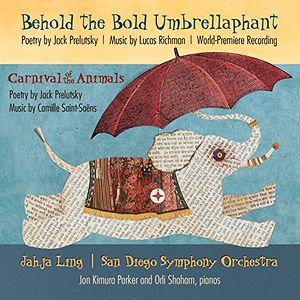 The San Diego Symphony Orchestra continued its post-centennial "100 & Beyond" celebration in a big way by giving the gift of music to the world. The world premiere recording of Lucas Richman’s Behold the Bold Umbrellaphant, based on the children’s book by Children’s Poet Laureate Jack Prelutsky, will be released digitally world-wide on November 8th and physically in the U.S. and Canada on November 15th. The release, following on several extremely successful world premiere live performances of Umbrellaphant by the Symphony, is destined to become a musical classic alongside such greats as Prokofiev’s Peter and the Wolf, and Saint-Saëns Carnival of the Animals. This release also launches the San Diego Symphony’s own record label and new distribution deal with Naxos of America.

Upon commissioning Lucas Richman to write a work based on Mr. Prelutsky’s book, the San Diego Symphony’s premiere of Behold the Bold Umbrellaphant in 2009 was met with such an overwhelming response that funds were secured to record the work. Once it was learned that Jack Prelutsky had already written new poems to Camille Saint-Saëns' classic Carnival of the Animals, the orchestra decided that it was the perfect companion piece for this recording. World-renowned pianists Jon Kimura Parker and Orli Shaham team up as the piano duo for this brand new recording of Carnival of the Animals. The release was recorded by Grammy®-winning recording engineer Robert Friedrich of Five/Four Productions and produced by Erica Brenner, both formerly with the award-winning Telarc label.

Lucas Richman, a Grammy®-winning conductor who has worked with numerous composers recording scores for major films, is also an accomplished composer. His music has been performed countless times over the last ten years and his works written specifically for children have been featured in young people’s concerts presented by orchestras throughout the country. His affinity for writing for youngsters compelled the San Diego Symphony to commission him for Behold the Bold Umbrellaphant and the result is an imaginative and colorful score that speaks to all ages.

Behold the Bold Umbrellaphant is destined to become a new classic in music for listeners young and old, with accessible melodies and zany poetry. The CD's beautiful packaging, with illustrations by Carin Berger, tie in well with Prelutky's book. Note: Jack Prelutsky’s books Behold the Bold Umbrellaphant (published by HarperCollins) and The Carnival of the Animals (published by Random House) are available at fine bookstores everywhere.