Back to List
News
Andrew Von Oeyen in Prague 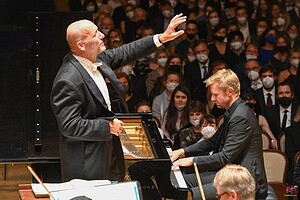 [...] It is not common that a composition is dedicated to a psychiatrist and neurologist, as is the case with Sergei Rachmaninov's Concerto for Piano and Orchestra No. 2 in C minor. But one can only agree with this particular dedication. Thanks to Dr. Nikolai Dahl, we have one of the most beautiful concerts in piano literature. Rachmaninov had a three-year hiatus after a nervous breakdown caused by the failure of his Symphony No. 1. He was unable to compose, still having only the first movement written out of the piano concerto he promised to write for the London Philharmonic Society. It was only with the careful treatment of Dr. Dahl that his appetite for composition returned, and in 1901 he completed the concerto and premiered it in Moscow with great success; a performance in Prague followed the following year. The concerto is a conversation - a dialogue between the piano and individual instruments, between the piano and the orchestra. The success of the concerto is based on mastering this dialogue.

It must be said that in the case of Mr Van Oeyen and the Prague Philharmonia, this dialogue proved to be superb. It was a great musical partnership, an interplay of artists who understood each other perfectly. The concerto is technically extremely difficult, yet Mr Van Oeyen managed it without difficulty. He worked imaginatively with the damping pedal, his strokes were firm and precise, his piano barely audible in a gentle pianissimo, rising to a roar in a strong fortissimo. His gradations were so captivating that he held his breath (and we held it with him!). It is not possible to name individual players who were the greatest partners in the dialogue; they were all immaculate. From the first bass beats of the piano in the first movement to the final finale, it was an emotional experience of extraordinary intensity, and one of the best performances of Rachmaninov's concert I've ever heard. As the audience applauded, Van Oeyen encored with a Rachmaninov Prelude and closed with a Sarabanda from the English Suite No. 5 in E minor by Johann Sebastian Bach.[...]