Back to List
News
Yevgeny Kutik plays Mendelssohn in Minnesota 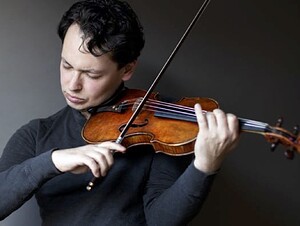 Minnesota Sinfonia emerges from the pandemic sounding better than ever

REVIEW: Impressive musicianship on display in lakeside concert that will be repeated Friday evening.

Mining a vein of value from the barren landscape of pandemic life was a challenge for musicians. But while lack of work and income was, of course, a big downside, some hit the proverbial woodshed and emerged as stronger players. Such seems the case with the Minnesota Sinfonia. A Twin Cities-based professional orchestra that spends as much time with light pops programming as symphonies and concertos, the ensemble sounds better than at any time in the many years I've attended its concerts.

On Thursday evening, it debuted its most high-profile program of the summer at St. Paul's Como Lakeside Pavilion. The soloist was a highly respected Belarus-born, Boston-based violinist, Yevgeny Kutik. And the repertoire featured not only such classical concert staples as Mendelssohn and Mozart, but a world premiere, as well.

I came away impressed with the musicianship (particularly from Kutik), but also by the concentration required to offer well-thought-out, emotionally wide-ranging interpretations while dogs howled and barked and birds flew by their heads. Despite the distractions, it was a satisfying concert.

The evening opened with the freshest piece, the debut of Jake Berran's "Ballade for Chamber Orchestra." A product of Eagan who's halfway through his studies at a musical hotbed, Ohio's Oberlin College, Berran adapted his style to the classical conventions the Sinfonia prefers and created an emotionally expressive piece with some fine writing for winds. Should he choose to, Berran could find success in film scores.

When you hear someone say "the Mendelssohn Violin Concerto," they probably mean the one he wrote late in his too-short life, which almost always comes up in conversations about the greatest violin concertos ever written. But the composer — who may have been the most accomplished prodigy in classical music history — wrote another at age 13.

Kutik made a convincing argument that Mendelssohn's D-minor Concerto deserves to be heard more often. He took a work prone to histrionics in some hands and made it a captivatingly subtle musical journey. While there were some big, bold lines in the stormy first movement, there was disarming gentleness in the Andante. And Kutik displayed exhilarating athleticism in the fast passages of the Roma-flavored finale.

Mozart was arguably at his compositional peak when he wrote his 38th Symphony, nicknamed "Prague" after the city where it was premiered. Artistic director Jay Fishman and the orchestra lent it the energy it deserves, particularly during a closing movement that would fit one of the composer's comic operas. But the slow central movement was equally engaging. While I would have preferred more crispness in the interplay, particularly when the fugues kicked into gear, the Sinfonia has never sounded better.

After "Family Lighter Side" concerts at Como's Lakeside Pavilion (July 22) and the Gibbs Farm Museum (July 23), the Sinfonia will close its summer season at the Lake Harriet Band Shell on July 30 with a program featuring another premiere (by William Feng) and music of the now-ubiquitous Joseph Bologne.