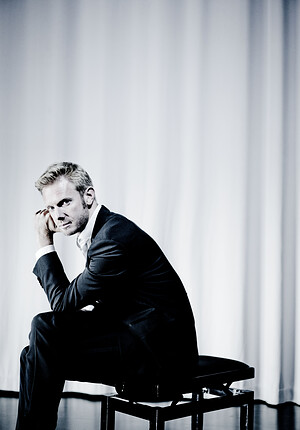 It might at first seem odd that after issuing albums featuring Saint-Saëns, Ravel, Gershwin, Debussy, and Stravinsky, pianist Andrew von Oeyen would set his sights on recording an album of Beethoven sonatas. But with 2020 being the composer's 250th birthday, the timing felt right, and furthermore, such a project would have offered a dramatic contrast to the pieces by Ravel, Saint-Saëns, and Gershwin on his Warner Classics debut. Yet the onset of the pandemic brought about a change in plan for the renowned pianist. Finding little inspiration in repertoire he normally loved to play, he found himself drawn instead to music that, free of embellishment and marked by clarity, spoke universally. That composer—one with whom he'd not previously felt an especially close kinship—was Johann Sebastian Bach.

As von Oeyen began re-acquainting himself with Bach's material, he quickly came to realize that, in his words, "this music just seemed to make sense now, when so little else did.” It offered a respite from pandemic-induced disarray, with the pianist himself astutely asserting that Bach's music expresses, “perhaps more than any other composer, the clearest sense of order in a chaotic world.” With his material having brought stability to the pianist's lockdown experience, von Oeyen then felt ready to re-embrace his original plan to record Beethoven, which he did in France in September 2020.

In framing two Beethoven Piano Sonatas, No. 13 in E flat and No. 23 in F minor, “Appassionata,” with Bach's eight-movement Overture in the French Style BWV 831 and two short pieces arranged by Wilhelm Kempff, von Oeyen's solo recital is interesting for its set-list alone. After setting the mood with the brilliant sparkle of Bach's Overture, the album shifts to the two longer Beethoven works before concluding with two entrancing examples of Bach's artistry. Prepare to be captivated by his thoughtful interpretations, and repeatedly.

All of the qualities the pianist himself found in Bach's music—rationality, vitality, honest, integrity, grace—are vividly present in his performance of the Overture, and with the world in a state of turmoil, it's understandable von Oeyen would find consolation in music where, “even in the most intricate chromatic textures, no dissonance would go unresolved.” Opening with a harpsichord-like flourish, the Overture works patiently through its expansive opening before advancing to the seven concise parts that follow, each distinguished by the pianist's exceptional command of tempo, phrasing, and dynamics. Much of it's exuberant, but there are gentler moments, too, such as the exquisite “Sarabande” that falls midway through the twenty-seven-minute performance.

As embracing is his rendering of Beethoven's Sonata No. 13 quasi una fantasia, Op. 27, No. 1, from its lovely “Andante” and lively “Allegro motto e vivace” to the wistful “Adagio con espressione” and virile “Allegro vivace.” It's overshadowed ever so slightly, however, by the towering Sonata No. 23 in F minor, Op. 57, “Appassionata,” which sets sail with the majestic, eleven-minute “Allegro assai” before progressing to the contemplative “Andante con moto” and monumental “Allegro ma non troppo.”

Kempff's piano arrangements of Bach's “Siciliano” from Sonata No. 2 in E-flat and “Largo” from Concerto No. 5 in F minor guide the release to a satisfying conclusion. Whereas “Siciliano” charms for its elegance and nostalgic sweetness, “Largo” captivates even more for the beauty and directness of its timeless expression. The album includes no shortage of breathtaking dazzle, but von Oeyen's playing is as compelling during the slower passages too. When the seventy-five-minute recording's over, you might well find yourself concurring with the comment made by the album's producer, Michael Fine: “The results speak for themselves and for me establish Andrew in the top rank of pianists.”