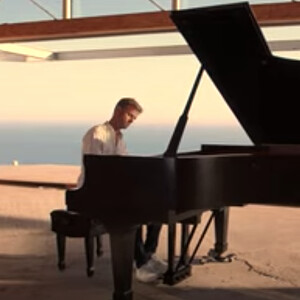 Pianist Andrew von Oeyen (b. 1979) responded (rec. 1-3 September 2020) to the imminent doom of the Covid global pandemic by reaching for repertory “raw” and “direct,” specifically the “contrapuntal canon” of J.S. Bach, music “good for the brain and the fingers.” Oeyen finds in Bach’s oeuvre a sense of “order in a chaotic world.” According to Oeyen, Bach’s keyboard works “welcome solitude.” Paradoxically, perhaps, even in the midst of intense personal meditation, Bach embraces a collective discourse of honesty and integrity, one might say a faith in human purpose and meaning. As a source of “second wave pandemic relief,” Oeyen sought the work of Beethoven, whose music emanates “stalwart and indestructible” willpower, virility, and determination, in a “vision devoid of extraneous content.”

Oeyen opens with Bach’s 1735 Overture in the French Style in B Minor, published in the second part of Clavier-Übung along with the so-called Italian Concerto in F Major.The Overture presents us Bach’s longest keyboard suite, its eight movements – first revealed to me by Roslyn Tureck – lasting perhaps 30 minutes. The first movement Ouverture itself demands considerable time, replacing the traditional allemande. After the appearance of the Sarabande, Bach permits optional dances, of which three proceed in pairs, with the first repeated after the second, but lacking internal repeats. Traditionally, such a suite would end with a lively Gigue, but Bach addends another movement, Echo, a dainty study that exploits the two manuals, the loud and soft, terraced dynamics, of the harpsichord. Other movements include two charming Passepieds and two lively Bourrées.

Oeyen plays with calm clarity, unaffected and expressively intoned. There appears no conscious effort to imitate Glenn Gould’s penchant for harpsichord effect. Besides the wonderful contour achieved in the sublime Sarabande, the music of the ensuing Bourrées dances with fleet energy, basking in the joie of existence. Oeyen invests his ornaments with a lively, forward motion, sprightly and impish, as Bach can be, even in moments of apparent devotion. The Gigue proceeds as a dialogue on one keyboard, the two hands in happy colloquy. The concluding Echo stamps a martial beat that breaks out into rushes of fleet, playful energy.

Oeyen turns to the improvisatory ethos of Beethoven’s 1801 Sonata quasi fantasia in E-flat Major, a work consciously departing from traditional sonata-form. The four movements proceed, attacca, as one unbroken unit, blurring sectional distinctions and challenging the conventional order of the tempos. The repetition of tropes from previous movements imparts the “cyclical” character to the music that culminates in the Fifth Symphony. After the songful A-flat Major Adagio con espressione, a virile Allegro vivace erupts, only to baffle us with a return to the Adagio as part of the coda. The sense of religious meditation dissolves through trills and a scalar transition to a Presto romp that makes fun of the opening materials.

The 1806 Appassionata Sonata has held me in thrall since my youth, when my mentor Carmine Arena would play it as an impromptu, and then hearing my first recorded performance, that by Claudio Arrau. Its version of the “fate” motif – here, three D-flats and C – and a move to a Neapolitan harmony never fails to engage us in a cosmic drama, one that obviously appeals to our pianist Oeyen, what he calls “its growing resolve to transcend trial.” The repeated use of the low F, at the time Beethoven’s darkest tone, underlies the grim will that propels this music. The huge spans in the ferocious coda Oeyen gobbles up greedily. As always, the ensuing Andante con moto in D-flat Major and its three variations urge us into a new spectrum of protected emotions. That first variant in syncopation leads to permutations in 16th and 32nds, harmonized in lulling figures. Oeyen in silken transition gives the double variation in switched hands and the final, diminished cadence that heralds, attacca, the potent last movement. This virtual perpetuum mobile, with its attendant Neapolitan sixths, possesses an allure words fail to capture. The sheer momentum of the figures, even given Oeyen’s taking the repeats, refuses to relent, seeming to embrace or overpower the diapason of the keyboard. Dance impulses literally collide with dramatic turmoil, and the cumulative effect, as Donald Tovey well expresses it, is a “rare work in sonata form that ends in tragedy.” How does the poet Millay cry out “Sweet sounds, oh beautiful music, do not cease!” The fervent energy of Oeyen’s coda might convince even Sviatoslav Richter acolytes of a worthy rival’s arrival.

This paradoxical rejection of the real world for the improved aesthetic vision resolves into Oeyen’s choice of two Wilhelm Kempff transriptions of Bach lyrics: the graceful E-flat Siciliano that challenges Gluck’s Orfeo’s Lament in its power to console; and the Largo from the F Minor Fifth Concerto whose stately poise came to me via Edwin Fischer and Kempff himself. As Oeyen puts it, “Crises have a way of forcing us to return to the essential.”