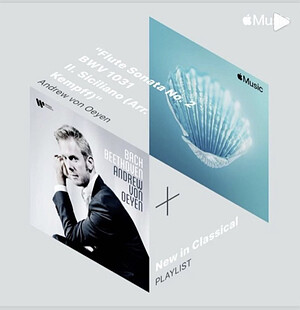 The pre-release track - Johann Sebastian Bach: Siciliano from Sonata No. 2 in E-flat for flute and harpsichord, BWV 1031 (arr. for piano solo by Wilhelm Kempff) - is making waves at Apple Music.

In addition to adding it to their Classical A-List, Apple Music has placed Andrew Von Oeyen's new track at #1 of their “New in Classical” playlist for the week.

Attached are the assets provided by Apple, and here is a smartlink to the playlist: https://w.lnk.to/nic

Apple Music has also given the track great featuring on these other playlists:
Bach and the Baroque (#1)
Songs Without Words (#4)
Relaxing Classical (#4)