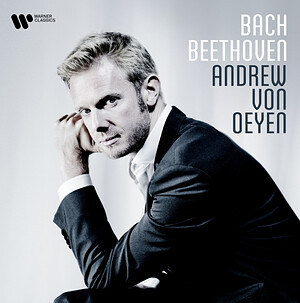 “Andrew von Oeyen leaves you convinced that he can do absolutely anything he likes with a keyboard.”
– Chicago Tribune

New York, NY – On June 11, 2021, Warner Classic releases pianist Andrew von Oeyen’s next album featuring the music of Bach and Beethoven. Shaped by von Oeyen’s experience of lockdown, this solo recital, recorded in France in September 2020, comprises Bach’s eight-movement Overture in the French Style BWV 831, Beethoven’s Piano Sonatas No. 13 in E flat and No. 23 in F minor, “Appassionata,” and and two Bach arrangements by Wilhelm Kempff.

Hailed worldwide for his elegant and insightful interpretations, balanced artistry and brilliant technique, Andrew von Oeyen has established himself as one of the most captivating pianists of his generation. At the start of 2020, von Oeyen had been planning an album of Beethoven sonatas to salute the composer’s 250th birthday and to offer a striking contrast to his debut Warner Classics release, a program of Ravel, Saint-Saëns and Gershwin with the Prague Philharmonia. The onset of the pandemic radically altered both von Oeyen’s plans and his feelings about the music he was playing.

As he writes: “I began to get concerned when the repertoire I normally love to play sparked little interest. Given my own mood and the prevailing sense of doom, I wasn’t keen to explore the stormy and heroic Romantic voices of Chopin, Liszt and Rachmaninoff; even the soothing sensuality of Debussy and Ravel had little allure. This was no time for emotional subjectivity, or poetic fantasy; I needed something raw and direct, stripped of anything non-essential. Most importantly, it had to be universal: less ‘me,’ more ‘we.’ It came as a surprise that the composer who appealed above all was one with whom I had not previously had a close relationship.”

That composer was Johann Sebastian Bach. “While I had studied many of his keyboard works, I almost never performed them; I was not a specialist. Yet his music was calling, and with a newfound liberty of time to explore repertoire without professional deadlines, I decided to bury my troubles in his contrapuntal canon,” von Oeyen writes. “While reading through a four-voice fugue I told myself: ‘This is good for the brain and fingers.’ … But I soon realised this was no academic pursuit; the attraction
was deeper. Something about this music just seemed to make sense now, when so little else did. Immersing myself in Bach’s pure universe offered a tabula rasa, a chance to musically reset as an unravelling catastrophe was compelling us to slow down and re-evaluate all kinds of basic things in our lives: priorities, careers, relationships, even where and how we live.”

“Perhaps more than any other composer, Bach expresses the clearest sense of order in a chaotic world,” says Von Oeyen. “If Bach served as my first musical mooring in confinement, I returned to Beethoven for second-wave pandemic relief. I was now ready to weigh anchor and face the storm in the company of stalwart and indestructible 19th century sonatas. Indeed, the
directness, virility, determination, and sheer willpower of Beethoven – qualities revealed most explicitly on this album in the last movements of both Op. 27 and 57 – aligned with my own growing resolve to transcend this trial. As with Bach, Beethoven’s
goal-oriented approach and universal vision, devoid of extraneous content, appealed especially at this urgent time.”

Andrew von Oeyen has recorded for Warner Classics since 2017. His albums under that label, including works for piano and orchestra by Saint-Saëns, Ravel and Gershwin and a disc including Debussy’s Fantaisie pour Piano et Orchestre, have been met with critical acclaim. Mr. von Oeyen has also recorded award-winning recital albums of Liszt, Debussy, and Stravinsky under
the Delos label.