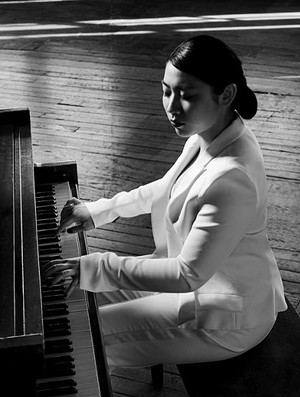 The San Diego Symphony’s new music director, Rafael Payare, has stirred up audience enthusiasm, and that’s a wonderful feeling for a group that has often felt like an underdog on the American orchestra scene.

But what happens when the dynamic young maestro is not on the podium?

On Friday evening, there were more vacant than occupied seats in the second level of the Jacobs Music Center’s Copley Symphony Hall. Conductor Laureate Jahja Ling and a relatively unknown Chinese pianist, Wei Luo, headlined a conservative program of Rimsky-Korsakov, Prokofiev and Dvorák.

If you stayed at home for this concert, it was your profound loss. Luo seems destined for stardom. With a minimum of fuss but a huge dose of flabbergasting technique, she ripped through Prokofiev’s Piano Concerto No. 3 in C major with ease and authority.

To be fair, Luo has won competitions and cultivated acclaim, most recently for her debut CD on DeccaGold. This recording reveals a dazzling artist with an astonishing range of colors at her disposal, put to the service of a confident young soul whose musicality suggests the experience of someone two decades older.

Her interpretation of Prokofiev was bracing, a headlong rush of scintillating virtuosity that kept pace with dangerously fast tempos, at times urging them on a few beats per minute more.

The video screen above Luo was a welcome aid. With a full shot of her at the piano, the video allowed the audience to enjoy her crossed hand dexterity, jaw-dropping leaps out of busy passagework to plunk out one note octaves higher and then snap back to the passagework, and keyboard glissandi that looked like someone lightly brushing crumbs off a table, but which produced forceful sprays of notes.

Prokofiev’s Third Concerto is a work well suited to hands hopping up and down and grandiloquent physical gestures, but Luo’s hands stayed very near to the keys, creating surprising volume with such close proximity.

One doesn’t associate Ling with breakneck tempos, but here he skillfully led the musicians in a crackling performance.

Most of the poetry in this concerto lies in the slower inner movement — even here, the speeds were quicker than expected. Luo was able to bring out more color from the piano than she could elsewhere. Ling and the orchestra responded in kind. One notable passage was an intentionally sour brass and wind harmony at the end of a variation, teasing out the duration of the penultimate chord before resolving it.

It was a stunning performance, rewarded with sustained applause from the excited attendees. Luo played an encore, a Chopin nocturne that she graced with a beautiful singing tone that would have been inappropriate for Prokofiev.

Preceding the concerto in the first half was Rimsky-Korsakov’s Suite from “The Snow Maiden,” given a colorful reading by Ling and the orchestra. The second movement is a “Dance of the Birds,” charmingly piped by the woodwinds, although Ling downplayed the chirping violins that later break out in the movement.

The second half of the concert was an ebullient performance of Dvorák’s Symphony No. 8 in G major, Op. 88. The fast movements were effective, although the slow second movement didn’t really come off, despite many beautiful moments within. The brass section excelled through the symphony, with beautiful calls and lusty trills from the horns, clarion fanfares from the trumpets, and solid support from the trombones and tuba.