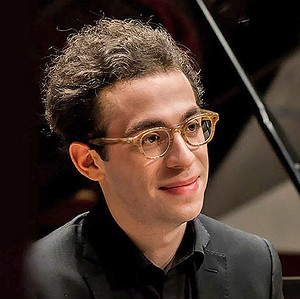 Alchemist Nicolas Namoradze brought his lab of chromatic arts to the filled-to-capacity Calderwood Hall on Sunday, wearing his transmuting intentions on his lab apron sleeve.

Forget the days when a relaxed matinee would ease you in with some Haydn or Bach — and sandwich in a modern piece before the intermission. For this matinee, the Tbilisi-born and Julliard-trained virtuoso started right out of the gate with Scriabin’s Black Mass Sonata in F Major, which turned out to be a proper keynote to the program. With very slow tempo in the beginning, as if savoring the process, he showed to the audience that the business of summoning the uncanny forces required a lot of concentration, but also a musical language to which the audience can fully relate. He articulated the sonata truly idiomatically, with proper stormy outbursts and the sense of exhaustion in the final bars. While recovering from this brush up with the Dark Lord, the audience found itself on the wings of Bach’s Sinfonia in F Minor BWV 795, which Namoradze commenced attaca. The handout pointed out similarities between the two pieces in their reliance on chromatic sequences, but whatever the pretext of this juxtaposition, it worked magnificently.

With all this magic in the air, Namoradze’s somewhat revisionist approach to Bach’s Partita BWV 830 could not surprise anyone. The Toccata reveled in very fluid tempi, the Allemande came across as memories of an elusive, long-forgotten dance. And just as one could summon nostalgia for Gouldian drive, Corrente satisfied with a proper whirlwind, while Aria gave none of the expected peaceful reprieve. He enunciated and voiced to perfection, conveying a strongly felt concept, albeit not always a familiar one.

The pianist began the second have on a much lighter end of the spectrum. Alexina Louie’s highly programmatic piece I leap through the sky with stars with its rather simplistic rhetoric set the stage for Namoradze’s own Etudes; virtuosic works, they evoked Ligeti’s Etudes, though much lighter in mood throughout. Engaging and brilliant, with names from Major Scales to Double Notes, they ironically suggested the theme of having fun during inevitable long practice sessions. But they also served as ample vehicles to demonstrate the composer’s wit along with digital prowess.

All this practicing came in handy in the full set of Scriabin’s Opus 42 Preludes. Scriabin’s farewell to his romantic and Chopinesque younger days shone pearly and effortless, while properly serving the composer’s obsession with associating sounds to colors. The third and fourth preludes, both in F-sharp major, sounded as if coming from different instruments. The central prelude in C-sharp minor, a mini poem in its own right, stormed up to its climactic moment, but unfortunately got marred by a cell phone ring tone. When are we to expect an app that silences the phones automatically? It is urgently needed by that upmarket segment sophisticated enough to spend Sunday afternoon listening to Scriabin, but not with it enough to find the ringer-off button.

The official closer, Scriabin’s idiomatic and uplifting Sonata op 30, got capped off with an encore of the composer’s popular Prelude in C-sharp Minor from opus 2. Namoradze’s Scriabin is to be cherished, as is his challenging and refreshing approach to programming.